What makes platinum special? Because of its beauty and value, platinum jewelry has alwaysbeen given as a special expression of love for engagements, weddings, anniversaries, birthdays, and holidays. One of the rarest precious metals, platinum is found in only a few locations around the world. Platinum has a rich and noble history. It was first used by the ancient Egyptians about three thousand years ago. Eight hundred years later, the Incas worked with platinum. The first platinum jewelry in Europe appeared around the year 1780, at the court of Louis XVI of France. Many of the world’s most famous diamonds, including the Hope Diamond, are set in platinum. Carl Faberg, the famed 19th-century Russian jeweler, prized working in platinum, as did Louis Cartier of Paris and many other great jewelers throughout history.

Fine jewelry is a timeless symbol of beauty, love and joy. When selecting fine jewelry, one searches for the most precious of gemstones and designs, and especially for the most beautiful and durable of metals. Understated and elegant, platinum is one of the rarest of precious metals. Its exclusive and rare nature is what makes it expensive. To extract one ounce of gold – about three tons of gold ore must be mined. To yield an ounce of platinum – a full ten tons, or 20,000 pounds, of platinum ore must be excavated from the earth! Platinum is normally located quite deep below the earth’s surface and is four to five times as expensive as gold to refine. About three-quarters of the world’s platinum supply comes from Merensky Reef in South
Africa.

Platinum is lustrous. Platinum’s rich, white luster complements diamonds and other precious gems while its neutral color enhances a stone’s brilliance and depth. Platinum is fashionable. Platinum jewelry appeals to many people today because of its subtle beauty and understated elegance. Many platinum jewelry designs are accented with 18-karat gold, creating a sophisticated, versatile and fashionable look. A piece of platinum jewelry feels substantial and weighty. Jewelry that is made out of at least 90 percent pure platinum weighs 60 percent more than the same piece of jewelry made of 14-karat gold. In the United States, platinum jewelry is usually composed of 85 percent to 95 percent pure platinum, which is marked “850 Plat.”, “850 Pt.”, “950 Plat.” or “950 Pt.”. If a

piece of jewelry is marked with the word platinum, it must then be at least 95 percent pure by law. Jewelry containing at least 50 percent pure platinum and at least 95 percent platinum group metals (platinum, palladium, iridium, osmium, rhodium and ruthenium) is marked with the platinum content followed by the content of the other metal. For example: “600 Plat. 350 Irid.” or “600 Pt. 350 Ir.” Jewelry containing less than 50 percent pure platinum content cannot be marked with the word “platinum” or any abbreviation thereof. Platinum had reached its peak of popularity in the early 1900s when it was the preferred metal for all fine jewelry in America. When World War II began, the U.S. government declared platinum a strategic metal and its use in non-military applications, including jewelry, was disallowed. To appease onsumers who preferred platinum’s white luster, white gold was substituted in platinum’s
absence. Today, platinum charms and enchants a new generation of consumers. Platinum – rare, classic and timeless. Platinum is truly one of earth’s rarest gifts and most precious of metals.

Platinum is the greatest gift one can give to another. A symbol of the highest and purest emotion should be fashioned from platinum, the most noble of all precious metals. As platinum’s pure white luster, strength and durability are recognized and admired, bridal couples worldwide are rediscovering platinum as the metal of choice for engagement, wedding and anniversary jewelry. A diamond and its setting should last forever. Because platinum is superior to other metals in strength and
durability, it offers a diamond the greatest protection. The breathtaking radiance of a diamond fused with the timeless elegance of platinum creates a rare and enduring symbol of love. Choosing a gemstone is just part of the jewelry buying process; its setting is also of utmost importance. Like love, it should be strong, pure and enduring. Platinum engagement rings and wedding bands celebrate a lasting bond.Platinum anniversary bands rekindle the passion. Platinum’s subtle beauty enhances a stone’s brilliance. Platinum is the perfect metal in which to set precious and
beautiful stones. Legendary jewelers such as Cartier, Faberge’ and Tiffany created their timeless designs in platinum. Platinum, the strongest of all precious metals,has a subtle beauty that enhances a stone’s brilliance and depth and is a perfect symbol of the absolute emotion known as love. Strong. Rare. Precious. A platinum ring, the rarest and purest expression of love. Visit us today to end your search for the perfect platinum ring.

What else should I know about platinum? Will platinum scratch? Signs of wear,including scratches, will inevitably appear in all precious metals, even in platinum.However, due to platinum’s durability and strength there is usually little metal loss when the piece is scratched. If your platinum jewelry does develop visible scratches, you should have the piece repolished by a professional jeweler. Is platinum fashionable? Will it coordinate with my gold jewelry? Platinum’s white color beautifully contrasts with yellow gold and adds versatility to your existing wardrobe. Where to Buy Platinum Jewelry? Platinum jewelry can be worn over a lifetime and passed
on to future generations, so where you buy it is important. But how do you know where to buy? The answer is simple: buy from a professional jeweler, someone you can trust. Choose a retailer who has been serving the community for a number of years and has an established reputation. A professional jeweler will not only help you with this purchase, but can help you with all your future jewelry needs. We want to be your life-long, professional jeweler. 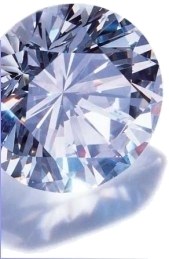